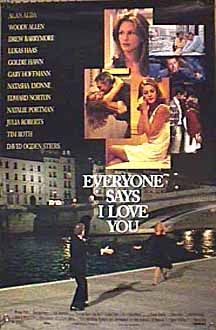 
EVERYONE SAYS I LOVE YOU
de Chico e Groucho Marx

Christopher Columbus he write
the Queen of Spain a very nice little note
He write "I love you, baby"
and then he gets himself a great big boat
He's a wise guy.

What do you think Columbus do
When he come here in 1492
He said to Pocahontas "Acki Vachi Vachi Voo,
"That means "You little son of a gun, I love you."

Everyone says I love you
But just what they say it for I never knew
It's just inviting trouble for the poor sucker who
says I love you.